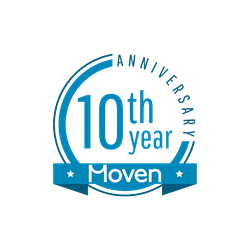 Moven, the New York-based financial technology innovator is marking an historical moment on August 8, 2020 as the company celebrates its 10-year anniversary. Brett King, Moven founder and Executive Chairman, first registered the domain name movenbank.com on August 8, 2010. The beginnings of the company can be traced to Brett King’s national launch tour for his bestseller Bank 2.0. The concept of transforming access to banking through technology was in its infancy, yet was attracting attention from entrepreneurs, bankers, innovators, and the like, and generating conversations about the future roles of technology and banking.

Presented with an open challenge while at a speaking engagement in Los Angeles by a group of entrepreneurs who asked, why would banks willingly use technology to help consumers save money when it prevents banks from earning overdraft fees and charging high interest rates on credit cards and loans. Aware of the emerging fintech revolution, King simply stated, “I will”. Later that day, he registered the domain Movenbank.com or “Move and Bank”. And so was born, the world’s first mobile-driven, smart bank account.

The award winning, intuitive banking app emerged as the leading mobile-based, customer centric alternative to traditional banking. The company continues to offer the product to banking partners around the globe.

According to Brett King, “10 years ago when we started the path to Moven we were the only mobile-first challenger bank in the world. Forging that path has now seen the emergence of hundreds of challenger banks globally based on the design patterns we set back in those early years. Now more than ever, we need an intelligent day-to-day bank account that will help consumers save money, this is the mission we started in 2010 and one we’re still committed to today.”

Richard Radice, CFO adds, “It has been a pleasure to be a part of the continued development of Moven, particularly as we continue to stay steps ahead of the market in terms of innovation”.

“With a U.S. patent for financial wellness, Moven is back again to lead the market by 18 – 24 months during this terrible economic time. This is the place to be, and I am proud of helping make Moven the market leader”, says Moven CEO Kesh Talwar.

Marking the milestone occasion, Moven released video testimonials, recollections and insights recorded by some of the leading voices in Fintech as well as Moven investors and supporters.

Movencorp, Inc. is headquartered in NYC with dedicated employees around the globe. Movencorp is a leader in developing smart-banking technologies designed to improve financial health and wellness. Movencorp, Inc is the only company to have a U.S. patent for Financial Wellness, as well as a Moven Oath which underscores our commitment to helping individuals around the globe achieve financial health.